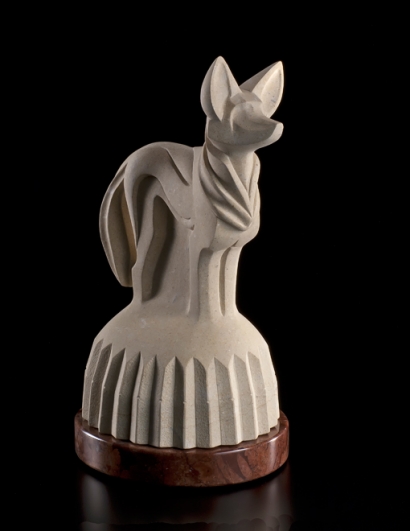 The coyote is originally an animal of the Great Plains, so I chose to carve “Sun Dog” from Silverdale Limestone.  This elegant beige stone was formed from billions of shell fragments in the ancient inland sea which is now Kansas.

Coyotes remained animals of the plains until the extermination of wolves and decimation of cougar and grizzly bear populations. Coyotes moved into the habitats vacated by these disappearing species who were their only natural enemies.  Ever-adaptable coyotes have since expanded their territory from South America to Alaska.

Now the only enemy of coyotes is humans.

Humans were not always the enemy.

While the wolf still roamed the U.S. people were busy killing them off. Once the wolf was gone, people tagged the coyote as the next “varmint” to be eradicated. Millions of coyotes have been killed since the mid-1850’s.

So why are there still so many? Along with being very intelligent and adaptable, they have a biological mechanism which causes more females to have more pups when the population is threatened. When coyote populations are left alone there are actually less coyotes than when people are trying to wipe them out.

After 100 years, you’d think we might have figured this out.

In 1940 people in Klamath County, Oregon, thought that coyotes were eating too much of their food crops and decided they should exterminate them. By 1947 all the coyotes in Klamath County were gone.

The following year there was an explosion of the mouse population, estimated at 10,000 mice per acre. This was known at the time as the Mouse War. There was massive loss of crops to all those mice.

Ultimately, coyotes were reintroduced into the county and the mice were defeated. Varmint . . . phooey.

Limestone is a very interesting stone. It carves “like buttah,” holds a clean edge like crazy, and produces the absolute best shadows when finished matte.

The photographer who shoots my sculpture, Mel Schockner, is a wizard at lighting. He has an ocean of experience shooting sculpture and an amazing array of lights and screens of all shapes and materials which he positions just exactly right to highlight a plane or accent an edge.  It is great fun to watch him work, and I am always thrilled with the images he creates from my sculpture.

Shooting the sculpture is the last stage in its creation. I am most fortunate to have a master do the honors.  Mel’s use of light and shadow truly captures this stone sculpture as a dog of the sun.

I make only one of each sculpture, so when it’s sold that’s it. All I have are the memories . . . and the stunning images created by Mel.