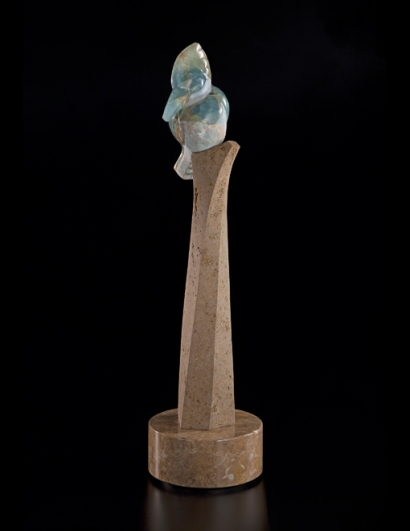 I titled this stone sculpture “Solo” both for the solitary nature of the Belted Kingfisher, and for its distinctive call. One usually hears the kingfisher long before spotting it along a riverbank or lakeshore.

The limestone tree-form, with its many vugs (porosities) and inclusions, is reminiscent of the dead trees found along the banks where kingfishers customarily perch while scanning the water for fish. Once a fish is spotted, the kingfisher flies out and plunges head first into the water to catch it–like a freshwater pelican.

I find the distinctive silhouette of the kingfisher to be most appealing, easily recognized, and unique in its proportions.  It has a stocky compact body, what appears to be a large head (due to the long feathers in its crest), and a long prominent beak. The shapes themselves are interesting to me–one does not think of birds as having such large heads and squatty bodies.

If form follows function, perhaps repeated collisions with the surface of the water may have prompted the kingfisher to evolve a substantial upper body to absorb the impact of repeated dives.

For me, it is a gutsy little bird with the audacity to plunge headfirst from a significant height into a river or lake for a routine meal.

The fantastic must be commonplace in the life of the kingfisher.

Blue onyx is a semi-precious gemstone only recently discovered.It is known to exist in only one location 13,000 feet up in the Argentine Andes. I have carved blue onyx quite a few times and, although it is a tricky stone to carve, I find it worth the extra care.  The color is irresistible.

The stone itself is somewhat translucent and has a deepness to it, like looking into time. It breaks and reforms over hundreds of millions of years creating areas of different greens and blues.  Minerals seep in and leave their telltale petrified brown lines.

It is an ancient undecipherable code of the history of the stone. Humbling, not unlike standing under a Coastal Redwood.

I think this is much of the allure of sculpting in stone for me. I will call it geologic serendipity.  Events happen over millennia at an extremely slow pace, and I find them in the stones I carve.

I am witness to the result, though not the process, and this gives me a thoughtful perspective on existence.