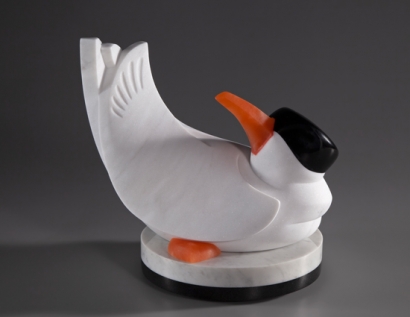 The Arctic fascinates me. I discovered the Arctic Tern while researching polar bears for my stone sculpture “Dancing on Thin Ice”. (The Arctic Fox was also a discovery during my polar bear research; the fox took form in stone as “Arctic Wind”.)

I was first struck by the elegant graphic simplicity of the Arctic Tern. White body, black head, and bright red beak and feet quickly took shape in my imagination—three stones I adore to carve and a tricky combination using stone resin to make it real. On further research I discovered their extreme lifestyle and was hooked. Arctic Terns are marvels of the animal world. “Rest Stop on the Arctic Flyway” is my homage to this extreme and energetic little bird.

The Arctic Tern is a small sea bird. It weighs up to 4 ounces, its body is about 15 inches long, with a 30-inch wingspan.  They live in very large, frenetic colonies of terns and other sea birds. They split their year between the Arctic and Antarctic, enjoying the summers in both polar extremes. That means a migration marathon of 44,000 miles round trip.

They are ground nesters and exceedingly protective of their nests and chicks. They dive bomb any creature they see as a threat to their nests, attacking from behind the animal’s (or person’s) head, chasing and pecking repeatedly until the intruder runs away.

Arctic Terns are skilled flyers, with long tails and sleek pointed wings. They hunt by skimming the surface of the water and diving up to 20 inches below the surface for fish, and grabbing insects from the air.   They migrate from the Arctic to Antarctica following predatory fish that stir up schools of smaller fish, which they swoop in to pick off.

Carsten Egevang is a leading biologist in Greenland studying the Arctic Tern. He postulates that the terns migrate from pole to pole because of the abundance of food available in the short Arctic and Antarctic summers. The oceans at these times are bursting with fish and plankton, and this makes the massive trip well worth the effort.

-Arctic Terns have the longest yearly migration of any bird on the planet—44,000 miles round trip from Greenland to Antarctica.

-Their yearly migration allows them to live in perpetual summer, because it is summer in Antarctica when it is winter in the Arctic.

-Arctic Terns experience more daylight than any other animal on the earth.

-Arctic Terns can live to be over 30 years old. They can fly up to 1.25 million miles in their lifetimes, which is 3 trips to the moon and back.

-Arctic Terns do not fly a direct route when migrating, but take advantage of prevailing global wind systems to help them conserve energy on their long flight.

-Arctic Terns can sleep while gliding in the prevailing winds.

I love carving stone, and I love combining different stones to create my stylized animals. “Rest Stop on the Arctic Flyway” is a stone combination that gives me shivers!

Sparkling white Sivec marble from Macedonia (this piece with subtle grey vein), deep shiny Atlantic Black marble from a secret quarry somewhere along the Atlantic coast (continent undisclosed!), and marvelous Translucent Orange Alabaster from Utah—one of the most beautiful enigmas in the stone world.   Put these together and you have sparkle, shine, and glow in one outrageous composition.

I try to make my stone sculptures worthy of the animals they represent. It is my goal to honor the natural world and celebrate the magnificent beings with whom we share this planet. Each animal makes my life richer, each personal discovery is a delight.

Rest Stop on the Arctic Flyway