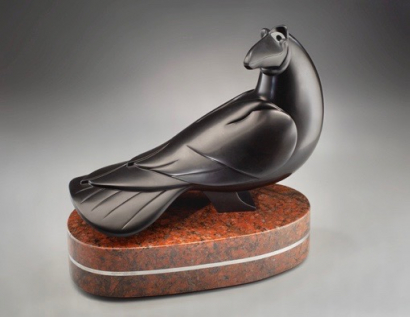 The taxonomic family Corvidae includes crows, ravens, and jays, some of the smartest birds in the world.  They have excellent memories and are creative problem solvers. Ravens have a large vocabulary of vocalizations, make and use tools, remember past events, and plan for the future. They are extremely adaptable.

The Common Raven is the largest perching bird or “song bird”.  It measures about 25 inches from head to tail, with a wingspan of 4 feet—roughly the size of a red-tailed hawk. (Crows are the size of pigeons.) Ravens are omnivores and eat just about everything including insects, rodents, lizards, frogs, bird eggs and young birds, carrion, and garbage. They live in a wide variety of habitats including mountain forests, coastal cliffs, tundra above the Arctic Circle, southwestern deserts, and prairie. They rarely live in cities.

Biologists developed a series of experiments based on intelligence tests given to great apes to test if ravens have the ability to make plans for the future aside from and different from their food caching abilities.   The biologists found that ravens can plan for future events that require tool use and bartering.  Ravens took a specific tool needed to attain a food reward at a future time; and they took a specific item needed to trade for a food reward in the future.

Ravens are, thus far, the only known non-hominid species that have the ability to plan beyond the current moment, and their intelligence is equivalent to that of a seven-year-old child.

Raven is a key character in dozens of creation stories of indigenous societies in the Pacific Northwest. He is a magical being who can take the form of humans, animals, and objects. In some stories he is a hero, a keeper of secrets, a magician, or a trickster. In some, he is greedy and selfish.  His acts, though they may have good outcomes for others, are to satisfy his own needs.

It is the trickster aspect of the raven’s mystique that fascinates me. I think humans observed the raven’s intelligence centuries before biologists began testing them. Their cultural stories are based on their observations of raven’s ability to figure out how to get what he wants.

As a former Disney animator, I cannot help anthropomorphizing ravens into the merriest of tricksters. I see glee in their success at solving problems (especially those given them by humans), confidence in their ability to remember the past and apply that knowledge to future possibilities. I want to believe the animal life experience is very similar to the human life experience. We are more alike than different. We are not above them, but adjacent to them in our intelligence and needs. Their right to a safe place to live is exactly the same as ours.

The Necessity of Science

Scientists are well informed and well trained to discover facts, prove hunches and draw conclusions. I would love to read a scientific study that pairs ravens with seven-year-olds to observe the outcomes of this partnership. I anticipate both subjects will encourage the merry trickster in each other.

The stone is Belgium Black Marble, one of the densest, hardest statuary marbles on the planet. It has an extremely high carbon content, which makes it the deepest and richest of the black marbles, and also the most brittle.

Black marble is formed over hundreds of millions of years from the primordial muck of prehistoric swamps. The carbon comes from decaying swamp plants; there are bits of fossilized seashell within the stone. Carbon combines with sulfur in the stone’s formation and is released as gas when the stone is cut. Consequently my studio smelled like swamp gas while I was carving. (Note: there is no smell after the sculpture is completed since the surface remains undisturbed and the gas cannot escape.)

This block of Belgium Black is the sister stone to the block I carved into “A Tree Needs A Bird”.  Even though it was formed in the same mass, I found a swirl in this stone’s bedding plane, the way the layers of sediment were laid down over time. Something like a tidal catastrophe (?) must have happened to bend the bedding plane. Geologic serendipity landed yet again on my side. (Or was it the Merry Trickster at work?)   The curved bedding plane allowed for a safe beak angled away from the body creating an interesting pose and a know-it-all attitude for my raven.

Ravens have terrific memories. They learn from experience and apply that knowledge to what they do in the present and in the future. Stone sculpture is a process of applying what you know, and working from the known to the unknown.

Ravens and stone sculptors start with a vision of what we want, then proceed to figure out how to do it. For centuries people in many cultures have seen ravens as magicians and tricksters. I have come to understand stone sculptors in the same way. The finished sculpture is more than the time, tools, and materials that went into its making.

The “merry” part is the joy and challenge of venturing into the unknown to create something that didn’t exist before, the satisfaction of successfully realizing one’s vision, and the fun of sharing the story and these images with others.