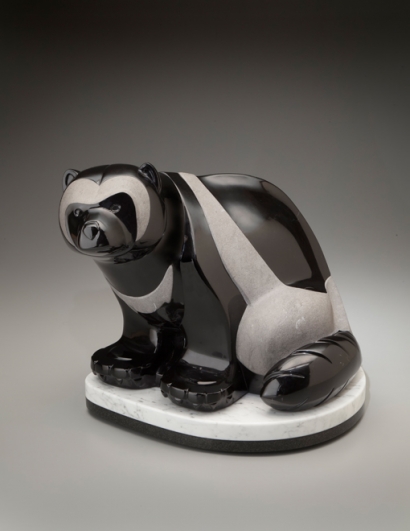 I didn’t know much about wolverines until I read The Wolverine Way by Douglas Chadwick. Now I am totally hooked.

Wolverines, the largest members of the weasel family, are designed for winter and live in northern mountain wilderness areas worldwide. They have extreme fur coats, feet the size of snowshoes, claws that function like crampons for scaling icy rock faces, and a very high metabolism.

Their scientific name is Gulo gulo, which translates to gluttonous glutton. Their high metabolism requires them to eat a lot, and they eat everything, including the bones.

Not much was known about wolverines until biologists began studying them in the 90’s. A team of scientists and naturalists, lead by Jeff Copeland, studied wolverines in Glacier National Park from 2002 to 2007. Their goal was to learn as much as possible about wolverines to apply the species for endangered status with the US Fish and Wildlife Service.

Climate change appears to be a direct threat to the continuation of this species. Chadwick’s book documents their study.

Females have 2 kits every two years. The first year the kits spend growing up with their mother. The second year the kits travel with their Dad through the extreme high country to learn how to succeed at being wolverines.

Their environment is filled with dangerous situations like avalanches, blizzards, and encounters with other apex predators. They need to learn survival skills like how to kill a mountain goat without getting skewered by the sharp horns. The survival rate of young wolverines is not high so wolverine populations increase very slowly.

Wolverines were nearly wiped out in the contiguous US by humans in the early 20th century, along with wolves, grizzly bears, and mountain lions. One hundred years later, humans continue to be the main predator of wolverines.

Wolverines are small animals, weighing up to about 30 pounds. They are bright and creative problem solvers. One wolverine (not part of the Glacier study) hid in a tree along a deer path, then dropped down out of the tree onto a deer’s back in order to take it down. (They weigh only 30 pounds, remember!)

Wolverines are fearless, and will challenge a grizzly bear for its kill. They have boundless energy due to their high metabolism and scale avalanche chutes as if they were traveling on flat ground. They embrace life and don’t quit, and I find this very inspiring.

Biologists have repeatedly applied the wolverine for endangered status with the FWS since the 90’s. Recently, in 2014, it looked like this time they would win, but the decision was reversed for some reason.

I sculpted “Phantom” to increase awareness of the remarkable nature of the wolverine. A portion of the purchase price will be donated to help gain endangered status for wolverines so we can begin to protect and foster this outrageous and awesome animal.

Wolverines are elusive, and I may never see one in the wild, although there is at least one in the Colorado Rockies. Animals do not need to serve a purpose for humans in order to exist. There is joy in diversity, unrelated to us.

The Most Awesome Quote

The PBS Nature documentary, Wolverine: Chasing the Phantom, concludes with a quote by Doug Chadwick which strikes a responsive chord:

“If wolverines have a strategy, it is go hard and high and steep and never back down, not even from a grizzly and least of all from a mountain. Climb everything—trees, cliffs, avalanche chutes, summits. Eat everybody—alive, dead, long dead, with still-warm heart, or frozen bones. I will never know what it is like to be one of these hunter-scavengers, but I have learned a little more about courage, and a lot more about what wild means just from being on the wolverine’s trail.”

The stone is Mongolian Imperial Black Marble, one of my favorite stones to carve.  The vein of this stone has run out in the quarry, so I am searching for another awesome black marble that carves like a dream.  (sigh)

There are several reasons why I love this stone.  It is not terribly brittle like other black marbles (high carbon content makes it brittle.)  It has fossilized snail shells and shell shards throughout the marble which remind me that this is an ancient piece of the earth.  I can get about 5 different shades of grey by finishing the stone to different grits and textures.

The very black areas on Phantom are the stone sanded to 2,000 grit with sand paper and then polished to 10,000 grit with black rouge–a combination of black pigment, wax, and tin oxide.

The very light areas are the raw stone sanded to 60-grit and then textured.  Polishing brings up the color, texturing takes down the color.

It was a delight and an adventure to research, design, and create this wolverine stone sculpture.  I hope they live on in the wild for centuries to come.

The Lone Wolverine, Shaw and Ford, University of Michigan Press, 2012