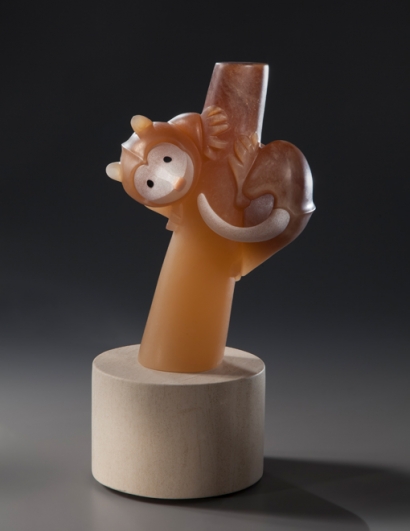 Here is the Virginia Opossum, another stone sculpture in my Varmint Series, which includes The Uptown Skunk, Sun Dog (coyote), and Rebound (gray wolf).

The opossum is one of Earth’s oldest surviving mammals, it has been around for over 70 million years, and shared the primeval landscape with dinosaurs. The Virginia Opossum is North America’s only marsupial species (nurtures its young in a pouch).  It has been quietly expanding its range since its discovery in 1607 by Captain John Smith (of Jamestown colony fame) to include nearly every state in the US. Opossums are nocturnal, expert tree-climbers boasting opposable thumbs on their hind feet, and have a prehensile tail useful in climbing and carrying bits of nesting material. They are one of Nature’s janitors and eat all kinds of insects, rats, rotting fruit, and carrion. They very rarely have rabies (only one animal in 800) and have the intelligence level of pigs—much smarter than domestic dogs and cats.

When threatened, the opossum plays dead. This is an involuntary action, like fainting, and very cool!  The animal goes stiff, lolls out its tongue, lowers its heart rate and body temperature, drools, breathes very little, and secretes a foul-smelling goo. This brilliant behavior discourages many predators from continuing their attack. The state of playing possum can last for up to 4 hours, and then the opossum slowly regains consciousness. I wonder how such a beneficial and unusual animal achieved varmint status?

This glowing stone is Agata Alabaster from Italy, quarried in the same region as Italian Ice Alabaster, another gorgeous translucent stone. I cannot say enough good things about Agata Alabaster. This is my first time carving it, and it is an easy, uncomplicated carve. The finishing is equally enjoyable, and the result with each ascending grit of sandpaper is absolutely entertaining—no other way to describe it! There are bubble streaks, dry seams, gradual color changes from light to dark, stripes, spots, deep clarity, and dark mixings of color. Each grit reveals more detail in the composition of this delightful stone. I find the color irresistible, like chocolate caramel. The nose and eyes are inlaid marble—Portuguese Pink and Mongolian Imperial Black respectively.

My creative year runs from September to August, and is centered on the Spring and Summer art shows. The culmination of my year is Sculpture in the Park, held here in Loveland, CO, the second weekend in August (next weekend!) This has been a particularly busy summer in the studio with several unexpected challenges thrown into the mix. The pose in “Oh!” is an expression of the internal state of the artist during this past June and July. I persevered in spite of stone surprises, soggy storage rooms—oblique, askew, but hanging on and working through it. We all have our sideways moments, whether ‘possums or people. I suppose this makes us appreciate the “vertical” times that much more. Thankfully, there is joy and release in self-expression, even when things get a bit off-balance.