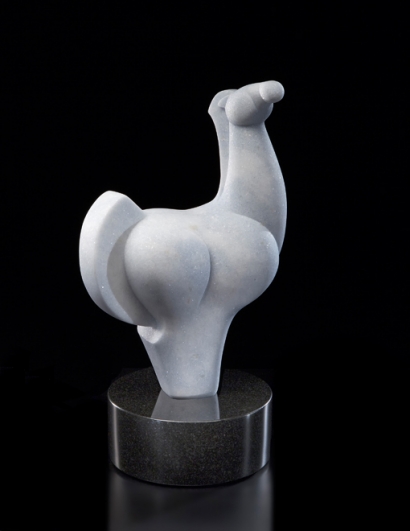 I made a sculpture called “Sun Horse” several years ago. “Moon Horse” is the compliment to that piece. Both stone sculptures are inspired by my retired mare, Kentucky, who taught me a lot about riding and the nature of animals. Our experiences are some of the best memories of my life.

She is a survivor–bought off a truck bound for the slaughter yards in LA twice before she found a safe haven with my riding friends and, ultimately, with me. In her retirement I do not think of her as belonging to me anymore. I am her guardian but she is her own horse now, a graceful force of nature, reminiscent of the moon.

The stone is Azzurro Aquamarina marble from Brazil. This was my first time carving it, so I had a lot of theories about how it would behave and I was wrong on almost all counts.

The crystal in this stone is huge, which implies a crumbly stone that will not hold an edge well. Initial cutting with a 4-inch blade created a sugar storm as the crystals came exploding out of the cut pinging my arms and legs.

I designed the sculpture thinking it would be crumbly so used very few edges—mostly curves and edges that could be curved if the stone proved to be as anticipated. Cutting in a sugar storm made me congratulate myself on my forward thinking.

Grinding was very normal for an abnormal stone—very fine dust, slightly heavier than other marble dust, more like calcite dust. Hmm. This was not as I predicted.

The few edges I had in my design were holding very well, not falling away or exploding out in another sugar storm. How surprising! The edges continued to hold through hand finishing with the rasp. Wow, maybe I could have well-defined edges rather than the rounded ones I had planned. How nice for me!

There is a subtle color change in the stone with some areas a very frosty blue and other areas a very creamy white. In the filing process, I discovered that the blue areas were much softer than the cream, and there were big and very hard crystals within the cream areas. This meant a difficult finish with the potential for lumps.

Horrors. Lumps imply poor craftsmanship. I couldn’t have that. I proceeded carefully with filing and dry-sanding with diamond pads. The lumps were smoothing out.

I had only two grits to wet-sand, taking the stone up to 180-grit in order to preserve the sparkling crystal. This was not a lot of wiggle-room for defeating lumps.

I had to leave the diamonds behind and proceed with sand paper. A mild concern, but it had to be done. More sanding with diamonds could have meant losing too much edge in the crystals and hence losing the sparkle.

A Latin Jazz music show on the radio (KUVO) gave me a lively tempo for sanding and I blazed through in a couple of hours, very mindful of the lump possibility.

The stone finished beautifully–crisp edges, clean lines, smooth surface. The design is about rhythm, balance, and form with a minimum of line–something new for me, along with a great new stone.