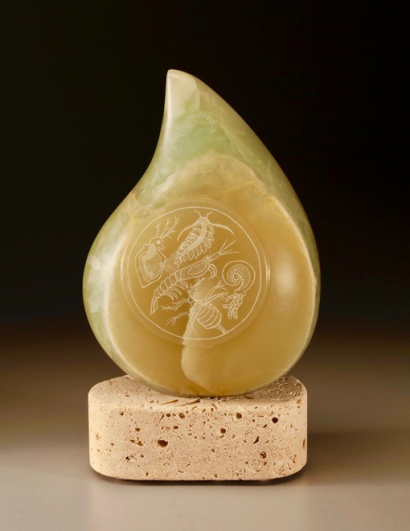 “Meet the Plankton” is a stone sculpture monument to the microscopic plants and animals that inhabit a murky drop of seawater. It is a humble celebration of life on earth; without plankton we could not exist.

I enjoy watching NOVA, a PBS science series on TV. In October 2021, NOVA aired a program called “Arctic Drift”, a winter research voyage to the Arctic Circle by a group of international climate scientists. Their goal was to measure exactly how the Arctic is changing as a result of climate change. Part of the program revealed the immense activity of plankton beneath 3 feet of ice in the Arctic Ocean. After that, I couldn’t stop thinking about the importance of plankton. I felt a sculpture was appropriate.

Plankton live in the sunlight zone in bodies of water, which extends down about 650 feet from the surface. The more murky and cloudy the water, the more plankton there are living in it.

Plankton live in both fresh and salt water. They are unable to propel themselves through the water, so they drift on the currents. There are many thousands of species of plankton, many of which are microscopic. Some are very large, like jellyfish, but still considered plankton because they drift. Scientists speculate that there are thousands of species of plankton yet to be discovered.

Phytoplankton use photosynthesis to convert sunlight into energy, their food, similar to plants on land. They are the foundation of the global food chain, and also provide one half of the oxygen on our planet–oxygen is a byproduct of the process of photosynthesis. Plants that grow on land provide the other half of the earth’s oxygen. Phytoplankton absorb carbon dioxide from the atmosphere similar to plants that live on land.

Zooplankton are the second foundation ingredients in our global food chain. They eat phytoplankton and other zooplankton, and are eaten by fish, who are eaten by bigger fish, and on up the food chain. Large marine animals like blue whales, manta rays, some seals, and some sea birds are primarily plankton eaters. Blue whales daily eat 4 tons of krill, a large shrimp-like zooplankton.

All life on earth is sensitive to the changing temperatures caused by man-made climate change, even plankton. Bodies of water heat up due to rising water and air temperatures, and the balance of compounds in a body of water can be upset by toxic run-off from chemicals and air pollution. This causes algal blooms called red tides, too much algae (algae is a form of plankton), which are toxic to fish. Animals and humans who eat the poisoned fish get sick.

I haven’t really thought about plankton in years, probably not since studying them in high school biology. They seemed obliquely obscure to my daily life. Now I begin to see those gazillions of microscopic plants and animals in all their single-celled magnificence. Recognition of their importance is a humbling experience and also a cause for celebration. Thank goodness they are there, supporting us. Plankton do need a monument, and now they have one.