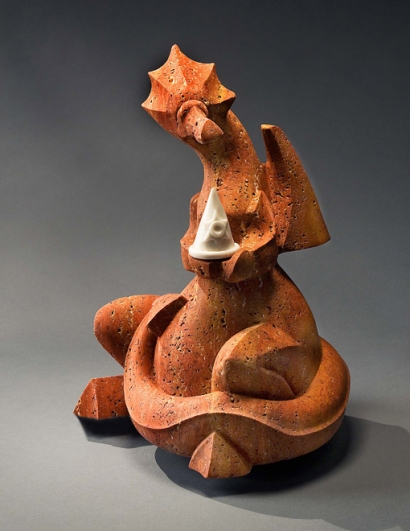 My clients requested a stone sculpture with a magic theme and a removable piece. After some thought and research into magic tricks and objects I suggested a magic animal, a dragon, since I enjoy sculpting animals more that anything else. They were very enthusiastic about the idea and so I proceeded to find the right stone.

I chose red travertine, a stone from the Middle East which is formed in part with water running through it. The water creates porosities in the stone called vugs. The vugs come in all shapes and sizes–worm holes, honeycombs, rivulets, some even filled with calcite and crystals.

I thought the vuggie surface texture and the variety of red and orange stripes in the stone would create an awesome dragon skin.

Working with the stone was a lesson in geology and patience. My tools could very easily get snagged in the vugs and grind away more than I intended to remove.

The different stripes of color in the stone were often layers of different hardness.  This meant my tools would blaze through some layers and creep through others.  Here was yet another reason to carve slowly and carefully.

The location of the vugs was impossible to predict since there were so many sizes and shapes of vug. There was also an enormous abundance of them.  This created a certain drama for me when I approached a place where I needed a solid point.  The most crucial spots were the points in the dragon’s hood, and the end of the dragon’s hands and nose.

Somehow I got very lucky and every place where I needed to have stone was solid. The thought of carving into the end of the nose and discovering a huge vug there was both exciting and terrifying. Each time I reached a destination in my carving and found solid stone was a mini euphoria.

I enjoyed working with my clients on this sculpture because it challenged me to do a piece that I would probably not have created on my own.

I chose to do the dragon, but was apprehensive that I might end up with a Disney-influenced design. I decided my dragon should be a wise and compassionate companion to humans.

I approached magic as an aspect of imagination and fantasy as that is my experience in Animation. I see magic (fantasy) as an essential aspect of reality. Reality devoid of magic would be unbearable.  Fantasy is what makes it possible for me to deal with and exist in reality.  Opposites are necessary in order to maintain an equilibrium in any system.

My dragon holds a wizard’s hat in his out-stretched hands–offering the gift of magic to the viewer, the ability to exist with grace in a chaotic world.

This is the most challenging sculpture I have made to date. The pose was complex and the stone was tricky to carve.

However, it was not a hair-tearing experience. Everything worked out great, every person I asked for advice or help was cheerful, knowledgeable, and correct in the information they gave me. My clients were brilliant. The piece required hundreds of hours of careful work to become real, and it was all really fun!

I hope this brings a bit of fantasy to your reality and makes your day a tiny bit more fun.

Contact Me
to Discuss Commissioning
Your Own Unique Sculpture