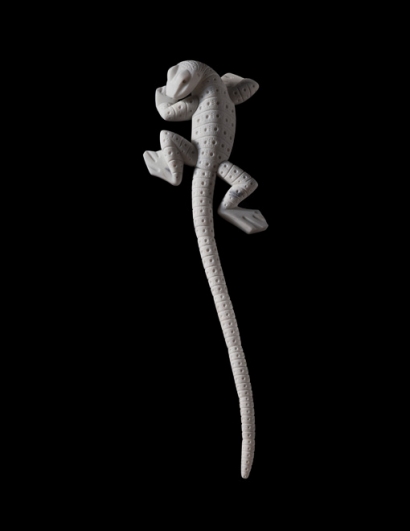 The blunt-nosed leopard lizard was one of the original 14 animals listed in the Endangered Species Act when it became law in 1973. Other animals on that list include the bald eagle and the California condor.

Many of the original 14 (and more that have been added since then) are now far better off than they were thanks to this terrific law that is saving our natural heritage. (Ironically, the power of the Endangered Species Act is now endangered.)

Sadly, the blunt-nosed leopard lizard is not one of those original 14 that are better off. It has the misfortune to live only in California’s central San Joaquin Valley, “the food basket of the world.” This valley is also home to approximately 4 million people, and an important oil-producing region. Habitat loss to all these interests has left little space for this very beautiful, 15-inch long lizard.

Scientific studies of a particular species are made in order to grant endangered status. Then, more scientific studies are made to determine how best to protect that species. To date, and this is 42 years later, insufficient studies have been made of the blunt-nosed leopard lizard to formulate a plan to save it.

I can only speculate that the future of a lizard is not as important as feeding the people of the world, and no scientists want to waste their time on studies that will never be implemented. It is a dilemma some would call a no-brainer. I can’t help but wonder at such a cavalier attitude. We are talking extinction, which is, obviously, forever. Is sharing not an option?

The stone is Vermont Marble with pale gold and grey vein. I carved the stone sculpture in pieces engineered to fit together with pins. I think it would be impossible to carve such a detailed, thin form from a solid piece of marble and expect it to remain whole. It is designed to hang on a wall, or grace a long table or mantle. The crystal in the stone is large and sparkling, a lizard gem.

The repetitive pattern is a direct steal from the blunt-nosed leopard lizard. Nature is the original artist. The animal is white underneath, light tan on top, with white horizontal stripes, dark brown spots, and tiny white dots around each spot. I couldn’t have invented a more appealing pattern.

The blunt-nosed leopard lizard can’t climb walls like a gecko. The pose is a metaphor—this species is clinging to existence. The title, “Hang On,” is a hope, a request, a command . . .