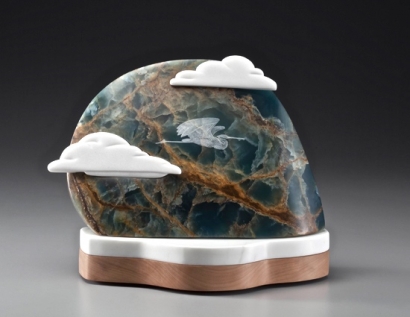 “Fresh Air” is a stone sculpture I made in tandem with “Clean Water”. Both are carved from Andes Blue Onyx—the blue stone represents air in one sculpture and water in the other. They also share a common focus and speak to those things we all want: fresh air to breathe and clean water to drink.

“Fresh Air” is a sky scape in luminous Andes Blue Onyx. The puffy clouds are sparkling Sivec Marble. A sun is inlayed on the back of the sculpture in golden Honeycomb Calcite. The bird is the Great Blue Heron.  I love the strong silhouette of this dramatic bird in flight. I love the serene beauty of this design.

As a member of the National Audubon Society I receive their magazine.  A recent article, “Survival by Degrees: 389 Bird Species on the Brink”, detailed the future effects of climate change on hundreds of bird species. The report is shocking and heart-breaking. Here in Colorado, we stand to lose from 62 species up to 123 species if our temperatures rise by 3 degrees Celsius. If temperatures rise by only 1 1/2 degrees Celsius we stand to lose between 10 and 84 species.

I am very concerned about two issues.  The first is dozens of rollbacks by our government on environmental rules and regulations that helped to make our air cleaner and our lives healthier.  The second is the reinterpretation of the Migratory Bird Treaty Act of 1918. This new interpretation by our government will take away penalties for the “accidental” killing of birds through industrial activity.

Many of the dozens of environmental rollbacks benefit the oil and gas industry, and include the easing of fuel emissions in cars to allow more pollutants in our air. They also include relaxing allowed levels of emissions for drilling and fracking oil and gas. This action will lead to significant increases in greenhouse gasses in our air, more deaths due to dirty air, and more rapid warming of our world. Detailed information is available in the New York Times article “95 Environmental Rules Being Rolled Back Under Trump”. Nadja Popovich, Livia Albeck-Ripka, and Kendra Pierre-Louis wrote the article, published and updated on December 21, 2019.

Further inspiration for this sculpture is the loss of 2.9 billion adult breeding birds in North America since 1970. This statistic is according to an article in the New York Times written by Lisa Friedman and published on December 24, 2019, “A Trump Policy ‘Clarification’ All but Ends Punishment for Bird Deaths”. The Trump administration has reinterpreted the Migratory Bird Treaty Act of 1918 to overlook all collateral destruction and injury to all birds due to events caused by any industrial companies’ activities. This is a disaster. For example: this rollback, had it existed at the time, would have placed no penalty whatsoever on BP oil for the millions of birds killed in the Deepwater Horizon oil spill in the Gulf of Mexico in 2010.

This is the term invented to address our feelings of guilt and helplessness when confronted with our own destruction of our planet.  Destruction is happening as a result of our over-consumption of natural resources, and burning fossil fuels for energy—thus raising average temperatures all over the world.

There are ways to be proactive as individuals and in groups to help stop global warming, to deal with the stress, and be part of the solution. Five steps are outlined in “Stop Freaking Out About the Climate”, an article by Emma Marris.  The New York Times published the article on January 10, 2020.

These are the steps:

Ms. Marris expands on each of these steps in her article.

I spend nearly all my time creating sculpture and running my One-of-a-Kind Stone Sculpture business. Many of my stone sculptures have proactive environmental themes and are inspired by endangered species, climate science, and climate crises. When one of these sculptures sells, I donate a portion of my share of the proceeds to help the animal that is the subject of the sculpture.

For example: in summer 2019, I sold a stone sculpture of two Alaskan wolves, entitled “Run!” As a result of that sale, I was able to donate to the Natural Resources Defense Council to help them litigate against destruction of wolves and their habitat in Alaska. I was also able to donate to W.O.L.F. a Colorado wolf and wolf-dog sanctuary.

Here is a link to all the donations I have been able to make from the sale of my work: On-Going Donations to Help Our Planet

In addition to monetary donations, I have also converted the electricity used in my home and studio to wind power.  I made the switch through GreenSwitch, a program offered by Loveland Water and Power.

Many cities have programs where customers can switch to buying renewable energy. It costs a bit more, but the small added expense is well worth it to me.

I must believe that we can address, ease, and ultimately solve our mess. Right now the future is ours to save. The alternative is unacceptable.