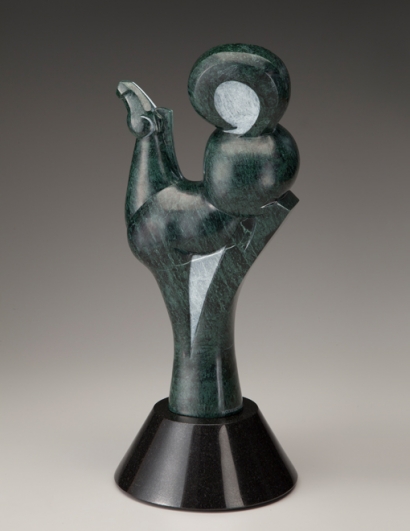 Movement is the foundation for every aspect of a horse’s existence.  They graze to eat and walk to digest.  They see in perspective only when they move their heads from side to side as in walking.  Their hooves are little pumps that circulate blood in their legs as hoof impacts ground.  They live to move, and move to live.

My dressage horse, Amarretto, inspired this “Exuberant” stone sculpture.  In his youth he was tall and slender, an honest 16.3 hands high.  He had attractive uphill confirmation and pretty gaits.  He loved to move and he loved to play.

I discovered his enthusiasm for inventing and playing games during a lay-up after an injury that required stall rest.  I hand-walked him for several weeks and then slowly brought him back into work.

During that time, we did ground driving and de-sensitizing exercises with scary objects.  Cardboard boxes and the dreaded blue tarp were my main tools.  The mazes and obstacle courses I guided him through fascinated him.

Eventually he wore the tarp and carried a box in his teeth that held his treats as he negotiated the course.  The first time I put the treats in the box was amazing.  I could see from his facial expressions that his brain was racing to determine the possibilities of what I had just done!

Amarretto had an enormous safety cone in the turn-out paddock.  This was a favorite toy during his daily personal playtimes.  He repeatedly threw the safety cone into the neighboring turn-out hoping the horse relaxing there would throw the cone back.  Nobody ever did.

One of his horse buddies, Magoo, was on stall-rest for several weeks and continually observed this one-sided game from his stall.  When Magoo was finally well enough to have a turn-out, he knew how to play the game and was the only horse who returned the thrown safety cone.  That totally warmed my heart!

Amarretto did not confine his joi de vivre to his turn-outs.  Riding with him was often an adventure in movement.

Exuberant is the best word to describe his philosophy of life.  I take that feeling forward with every stone sculpture I create.  This one is for him.

The stone is Verde Guatemala Marble, originally quarried in Guatemala, as you might expect.  The quarry ran out of stone some time ago, but a new strain of the same marble was found in India.  This particular block is Verde Guatemala from India.  (Geology is fascinating!)

The stone is extremely hard, and certainly the hardest marble I have ever carved.  The friction from cutting this stone was burning off the nickel plating on my diamond blade.  I had to switch to a sintered blade, used for cutting granite.  Slow going, but it did the trick.

Filing and sanding were extreme finger-busting efforts.  Each stage in the progression from raw stone to 600-grit sandpaper had to be done perfectly.  All scratches and tool marks had to be obliterated with each successive tool in order for the final “skin” to be flawless.  The next-higher grit was not effective in removing flaws missed by the previous sand paper.

Deep and rich color almost always comes with a price, and Verde Guatemala is no exception.  However, the end justifies the means for this color freak.