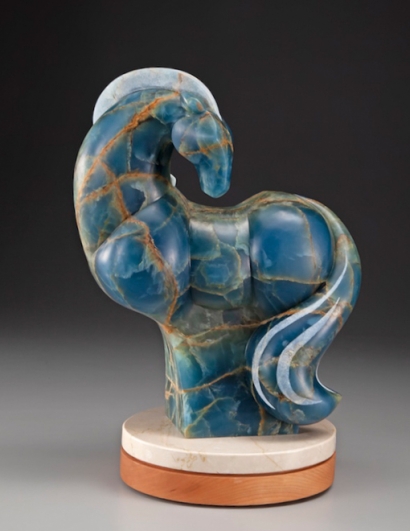 “Blue” is a sculpture homage to a rescued horse, and a monument to human compassion.

I have many awesome friends who inspire me. This sculpture is a tribute to one of them, an animal activist and rescuer. She is a gifted writer, and I asked her to tell Blue’s story in her own words. She requested to be unnamed in this post.

Blue’s hard luck story has a happy ending because of two kind hearted women who teamed up to help him.

Many years ago, Blue was purchased at auction for a commercial rental string. He was a painfully thin, pigeon-toed horse around 10 years old. He was given extra feed but when he was fattened up enough to be ridden, the hills proved too much for his challenging leg conformation. A very intelligent horse, he repeatedly laid down on trail to save himself when he could go no farther. Strike one.

He caught Strangles, a highly contagious equine respiratory disease, and was quarantined in a back pen at the barn, unable to work to earn his keep. Strike two.

There was a goat pen behind Blue’s quarantine pen. My friend had to pass through Blue’s pen to help take care of a little orphan goat. At first, he was suspicious of her but she always brought him a carrot and a kind word and he gradually began to trust her. Blue looked forward to seeing her on a daily basis and would greet her with a soft nicker as she approached his pen. They became good friends.

Terrible news. My friend learned that Blue was to be sent to auction. The only people who would be interested in a chronically lame hard keeper at an auction would be the killers. This was absolutely unacceptable. My friend searched high and low for a rescue that would be willing to take Blue in if she bought him (she couldn’t afford to keep a second horse). Eventually, she had the great fortune to find Yvonne Wall and her Forever Free Horse Rescue. She bought Blue and two days later, he was on his way to a home where he would receive the best medical attention and unconditional love for the rest of his life.

Yvonne Wall is an inspirational woman. She created Forever Free Horse Rescue in 2003 as a haven for neglected, abandoned, abused and elderly equines, so that they may live out their lives in care and comfort. The rescue was little known in 2006, and so miraculously, Yvonne had room for another horse at her sanctuary when my friend approached her for help with Blue.

Yvonne and her husband undertook a four hour round trip to pick Blue up and take him to his forever home. Yvonne held back tears when she first met Blue. He was in such a sorry state, she was unsure if he would even survive the journey back to her facility.

Survive he did and under the loving care of Yvonne, he thrived for 13 very happy, healthy years. My friend got to visit him a few times over the years and he always seemed to remember “Carrot Lady.” Blue passed away in January 2020; he was about 23 years old.

Blue and Yvonne’s stories touched my heart. Blue spent more than half his life in a great home, all thanks to my friend. How many times in one’s life does one have the opportunity to give such a gift?

Compassion in Our Time

I started sculpting “Blue” before the pandemic hit our world. Now I read daily about heroic acts of compassion from nurses, doctors, bus drivers, grocery store workers, delivery people, and so many more. Dire straits bring out the best in the best people. I never knew I lived among so many selfless heroes. There is hope for humanity.

We have new leaders in this new culture of illness who help each of us. In the before-Covid time all I saw was division and hatred. Now I see that compassion is the more powerful force. Even as I weep for our losses, I rejoice in our culture of compassion.

I chose to carve this thoughtful horse in Andes Blue Onyx obviously because it is blue. When finished, the stone looks like a gem, a treasure, a comment on the worth of a gentle horse with a kind spirit.

The stone is deep and magical, which is how I see horses. There is a dimension to their souls that reaches beyond our consciousness. The story of Blue reminds me of the story of my little mare, Kentucky. I believe Blue reached out to my friend the same way Kentucky reached out to me. Both were rescued horses in dire circumstances bound for the slaughter yard.

The National Sculpture Society created a show for members just after our lives were changed by Covid-19. The online show, “Works In Progress: Sculptures Created in Self-Isolation”, is 90 images of members’ sculptures in the process of becoming.

The above image, included in the show, was taken just after I finished the hand-rasping stage in my creative process. The rasp is the last sculpting tool and the first finishing tool. From this point, I filed the sculpture, and then sanded it to 600-grit with sand paper. Sanding, which is taking the scratches off, refines the surface and polishes the crystals, bringing up the color. The transformation of the stone is astonishing, not unlike Blue’s journey from doom to salvation.