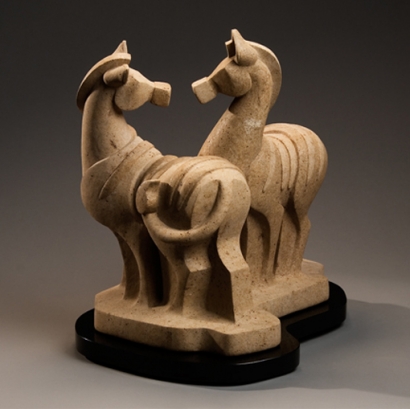 Here is “A Matter of Opinion”, a stone sculpture of two zebras having a conversation.  I began the sculpture at a 4-day limestone-carving workshop in Lawrence, Kansas, run by Myles Schachter, a great guy from whom I also buy most of my stone.

I attended the workshop with two of my stone-carving friends.  The experience was absolute fun and we all learned a lot about carving limestone. This piece was shelved for several months while I carved the dragon (“Magic Lesson”) and was started again in late February.

Limestone comes in many different colors and consistencies of classic beige. It is a fairly soft stone, easy to carve and holds an edge beautifully.  I have heard many stone sculptors say, “it carves like buttah’ . . .” and it really does when compared with marble.

My particular kind of limestone is called Cottonwood and comes from the ancient inland sea which is now Kansas. It is a rugged stone, full of vugs– porosities, remember?  The matrix itself is not completely mixed to a uniform consistency and color.  So there are swirls of brown, black, grey, and white.

My particular piece of limestone was also generously mixed with fossilized foraminifera, a species of protozoa, which provide a beautiful texture something like billions of miniature rice kernals. However neat, these single-celled creatures presented a challenge in the filing and sanding phase of creation.  They are extremely hard when compared with the soft limestone matrix in which they are embedded.

The stone certainly did not sand like buttah’.  But the effort was well worth it as the little “forams” provide much interest and character in the final look of the stone.

The zebra in the foreground is light with darker stripes while the zebra in back is darker with light stripes. This was a theme I wanted to present in this sculpture.  At the time I dreamed it up I had no idea how I was going to achieve that effect.

Early in the carving process I began to experiment with inert pigment mixed with a variety of chemicals commonly used on stone for enhancing color and sealing. I found out from a fellow stone sculptor about pigments used in the monument industry to paint designs on tombstones. I asked several of my mentors about the product, called Lithichrome, found where to get it, and proceeded with more experiments.

Ultimately, nothing worked to give me the effect I was looking for. At that point I decided that the piece didn’t need different colors and I would simply change the title and move on. After that, I decided to give plain color enhancer a try.

I meticulously applied the color enhancer with a teeny brush to the areas on the zebras I wanted to be different values.  Five coats later the stone, which is enormously porous, wouldn’t accept any more chemical.  Luckily I had a subtle differentiation in the stripes, manes, tail tips, noses, and the outlines around the ears.

The poses in “A Matter of Opinion” are a result of my 20 years of experience animating for Disney.  Strong silhouettes need to read in an instant and the poses of the characters must reflect how they are thinking and feeling at that moment.  Two very different attitudes are presented and they must be visually clear and narratively understandable.

Art as a Key to Self-Knowledge

As with many of my sculptures, I don’t fully understand what they are about and where they came from until they are finished. (Even then I may not really get it.)  I believe this idea grew from the culture shock I experienced in moving from California to Colorado.

Last year I made a small sculpture of a fish holding his breath, “Fish Out of Water”.  I came to understand this piece as an image of myself when I first arrived here, holding my breath hoping to be accepted.

The creation of the zebras revealed to me that I am finding my new identity as a sculptor and being accepted by new friends.  It may hold very many different meanings for you, and I hope it does.

That unconscious feeling made conscious through the creation of the sculpture was a memorable moment.  It is pretty cool when that happens!

“A Matter of Opinion” has proven to be my most complex and challenging sculpture to date. I look forward to discovering the elegance which lies in simplicity.  Perhaps my next pieces will be a step in that direction.

Ideas are strange things, and sometimes they hit me with the force of a tidal wave and I just have to make the sculpture–no matter how complex it may be.

A Matter of Opinion