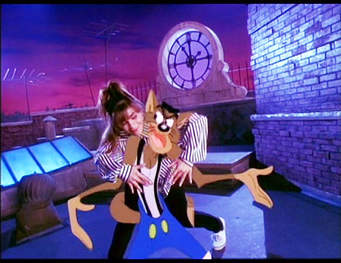 Mike Patterson directed the second animated music video, “Opposites Attract” for Paula Abdul. I animated half a dozen dancing cut-away shots of Scat Cat. The moonwalk was one of them. We had photostats of a dancer’s movements to work from.  The movement involved a lot of caricature of the live-action dancing to make it work as animation.

I learned a lot about caricaturing live action movement to adapt it to animated characters.  All the subtleties need to be exaggerated to get enough weight in the character.  This involves strengthening poses and adjusting timing.  I don’t have timing in stone sculpture per se.  But, knowing how to caricature a pose gives my sculpture more movement.

Sculptures with action poses always need pushing for the pose to feel satisfying.  All you have is one pose to carry all the excitement.  “Exuberant” is my sculpture with one such pose.