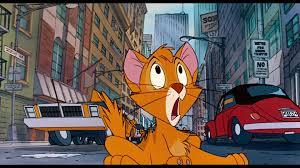 I animated personal tests during the downtime between films. Eventually I was promoted to apprentice animator (called Animating Assistant) for “Oliver and Company“.  I did a lot of research on kittens playing and thumb-nailed actions from video reference.  The orphan kittens in the box were some of my first scenes.

My tour de force came later in production when I was given a difficult scene.  Oliver gets stuck in traffic and nearly run over.  The cars were already animated in the computer.  I needed to map the cars and then figure out where Oliver would run and panic.

This was my introduction to creative problem-solving.  My thumbnails were so tight that the scene worked very well.  I learned the value of planning and research very early in my Disney career.

Research was key for me in animation to create believable animal characters.  It is still a key for me in creating stone sculpture animals.  The situation is very similar since I start with a real animal and stylize the design of the animal and pose.  I accumulated a vast knowledge of animal movement through my Disney research that serves me well as a stone sculptor.

Planning is another skill that translates directly to stone sculpture.  Planning is everything in a subtractive medium.  Once you cut it off, it’s gone!  I could never sculpt any of my pieces without planning, especially the ones with two figures carved from one stone, like “A Matter of Opinion“.