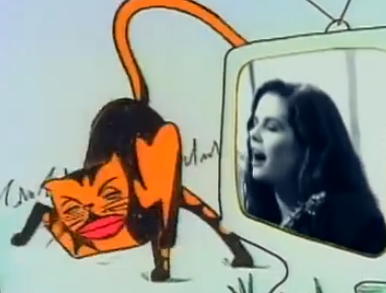 This Edie Brickell & New Bohemians animated music video, “Love Like We Do”, was directed by Mike Patterson. I animated the orange tiger cat. This was my first experience working with moving camera shots.  The animator had to match the camera move by always correctly changing the perspective of the animated character as it moved with the camera. Lots of discoveries and creative problem solving!

Animation is the epitome of creative problem-solving.  So is stone sculpture.  If I did not know how to innovate I would never have succeeded in either medium.

I sought out this freelance job because I wanted to animate moving camera shots.  I was pretty sure I could figure out how to do it based on what I knew of the “Roger Rabbit technique“.  That film had just come out and I loved the subtle “real” feeling of those shots.

It is the same with stone sculpture.  Once you know enough, you can take an educated leap to solve the problems you don’t know.  Mostly.

I stepped outside my comfort zone for several of the private commissions I made.  Patrons came to me with enormous enthusiasm for intriguing sculptures that I had no idea how I would make.  Their enthusiasm was contagious, and lots of positive energy helps to make neat ideas real.  As I continued to step outside my box, my box got bigger, and I stepped out again, over and over again.  Some of my box-stretching stone sculptures include “Magic Lesson“, “Nature’s Paradox“, and “Take Flight“.

Music video for the Edie Brickell & New Bohemians song
“Love Like We Do”
“Shooting Rubberbands at the Stars” album.